Celebrate the community of all beings! 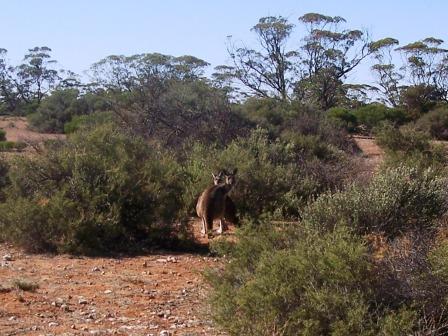 i took this on the way here this morning. they're just aff to bed after a night's browsing and digging up bulbs by starlight and moonlight. they're quite tame - they just stood there quite close to me and my little dog and watched while i took the picture. they were still standing there as we walked on our way. i called the one in front liwya a few years ago (she's about seven ), and then she had the daughter with a star on her head about four years ago and they've stayed friends. all their boy joes have gone bush to avoid incest which is a high risk if they remain in their birth territory. these two are quite affectionate. sometimes i think they stand close to the path i walk every day so that they can catch me, standing as close as they dare while i talk to them and sometimes take pictures. liwya is cornish for 'drive', because she often makes movements with her paws as if she's driving a car and i was walking round with my head full of cornish when she first came to my attention, as i was just learning it then. in those days she and several others used to come into the garden and crop the lawns and 'prune' the trees. but despite(?) some highly creative and perhaps rather radical topiary we've now fenced all but the most persistent ones out. they were sad for a while and almost went wild again, but they're coming back friendly again now. not as friendly - we used to let them have some grain when i fed the goats, but a couple of the bigger women roos used to come and try to take the dish out of my hands 'hey, gimme that!' and they're snitchy and there was a risk of getting raked with their very long, strong claws. i had a couple of joeys, road orphans i was rearing and rehabilitating, and that made the local roo population very interested and very friendly. i was sort of made an honarary kangaroo. i alll but hopped! :) then my joeys grew up and left their birth territory, and we drifted away. by then they were getting too fearless and we got scared so we've fenced them out.

Comment by Cacatua on February 25, 2010 at 14:24
Fascinating, and so different from any creatures that we have here. I've been putting out anything that might help our locals get through this long, hard winter, and have wondered what the repercussions of that might be when times get better. Will worry about that when the time comes I guess. I just know that I'd hope someone might help me if the situation were reversed. In all of the 38 years I've been here we have never had deer coming up on our porch and looking in the windows as they scavenge whatever they can find left in and around the bird feeders.

You need to be a member of Animism to add comments!